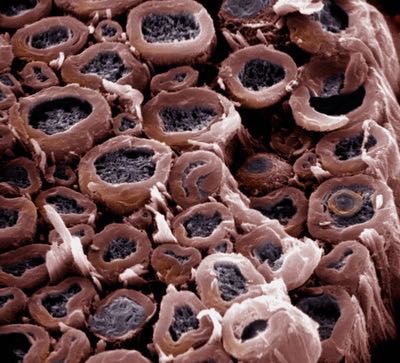 We can witness our bodies mature, then gradually grow wrinkled and weaker with age, but it is only recently that scientists have been able to track a similar progression in the nerve bundles of our brains. That tissue increases in volume until around age 40, then slowly shrinks. By the end of our lives the tissue is about the volume of a 7-year-old.

So finds a team of Stanford scientists who used a new magnetic resonance imaging technique to show, for the first time, how human brain tissue changes throughout life. Knowing what's normal at different ages, doctors can now image a patient's brain, compare it to this standard curve and be able to tell if a person is out of the normal range, much like the way a growth chart can help identify kids who have fallen below their growth curve. The researchers have already used the technique to identify previously overlooked changes in the brain of people with multiple sclerosis.

"This allows us to look at people who have come into the clinic, compare them to the norm and potentially diagnose or monitor abnormalities due to different diseases or changes due to medications," said Jason Yeatman, a graduate student in psychology and first author on a paper published today in Nature Communications. Aviv Mezer, a research associate, was senior author on the paper. Both collaborated with Brian Wandell, a professor of psychology, and his team.

For decades scientists have been able to image the brain using magnetic resonance imaging (MRI) and detect tumors, brain activity or abnormalities in people with some diseases, but those measurements were all subjective. A scientist measuring some aspect of the brain in one lab couldn't directly compare findings with someone in another lab. And because no two scans could be compared, there was no way to look at a patient's image and know whether it fell outside the normal range.

"A big problem in MRI is variation between instruments," Mezer said. Last year Mezer and Wandell led an interdisciplinary team to develop a technique that can be used to compare MRI scans quantitatively between labs, described in Nature Medicine. "Now with that method we found a way to measure the underlying tissue and not the instrumental bias. So that means that we can measure 100 subjects here and Jason can measure another 100 in Seattle (where he is now a postdoctoral fellow) and we can put them all in a database for the community."

White matter plays a critical role in brain development and decline, and several diseases including schizophrenia and autism are associated with white matter abnormalities. Despite its importance in normal development and disease, no metric existed for determining whether any person's white matter fell within a normal range, particularly if the people were imaged on different machines.

Mezer and Yeatman decided to use the newly developed quantitative technique to develop a normal curve for white matter levels throughout life. They imaged 24 regions within the brains of 102 people ages 7 to 85, and from that established a set of curves showing the increase and then eventual decrease in white matter in each of the 24 regions throughout life.

What they found is that the normal curve for brain composition is rainbow-shaped. It starts and ends with roughly the same amount of white matter and peaks between ages 30 and 50. But each of the 24 regions changes a different amount. Some parts of the brain, like those that control movement, are long, flat arcs, staying relatively stable throughout life.

Others, like the areas involved in thinking and learning, are steep arches, maturing dramatically and then falling off quickly. (The group did point out that their samples started at age 7 and a lot of brain development had already occurred.)

"Regions of the brain supporting high-level cognitive functions develop longer and have more degradation," Yeatman said. "Understanding how that relates to cognition will be really important and interesting." Yeatman is now a postdoctoral scholar at the University of Washington, and Mezer is now an assistant professor at the Hebrew University of Jerusalem. They plan to continue collaborating with each other and with other members of the Wandell lab, looking at how brain composition correlates with learning and how it could be used to diagnose diseases, learning disabilities or mental health issues.

The group has already shown that they can identify people with multiple sclerosis (MS) as falling outside the normal curve. People with MS develop what are known as lesions – regions in the brain or spinal cord where myelin is missing. In this paper, the team showed that they could identify people with MS as being off the normal curve throughout regions of the brain, including places where there are no visible lesions. This could provide an alternate method of monitoring and diagnosing MS, they say.

Wandell has had a particular interest in studying the changes that happen in the brain as a child learns to read. Until now, if a family brought a child into the clinic with learning disabilities, Wandell and other scientists had no way to diagnose whether the child's brain was developing normally, or to determine the relationship between learning delays and white matter abnormalities.

"Now that we know what the normal distribution is, when a single person comes in you can ask how their child compares to the normal distribution. That's where this is headed," said Wandell, who is also the Isaac and Madeline Stein Family professor and a Stanford Bio-X affiliate. Wandell runs the Center for Cognitive and Neurobiological Imaging (CNI), where Mezer and the team developed the MRI technique to quantify white matter, and where the scans for this study were conducted.

The ability to share data among scientists is an issue Wandell has championed at the CNI and has been promoting in his work helping the Stanford Neurosciences Institute plan the computing strategy for their new facility. "Sharing of data and computational methods is critical for scientific progress," Wandell said. In line with that goal, the new standard curve for white matter is something scientists around the world can use and contribute data to.