Fat (Ft) cadherins are enormous cell adhesion molecules that function at the cell surface to regulate the tumor-suppressive Hippo signaling pathway and planar cell polarity (PCP) tissue organization. Mutations in Ft cadherins are found in a variety of tumors, and it is presumed that this is due to defects in either Hippo signaling or PCP. Here, we show Drosophila Ft functions in mitochondria to directly regulate mitochondrial electron transport chain integrity and promote oxidative phosphorylation. Proteolytic cleavage releases a soluble 68 kDa fragment (Ftmito) that is imported into mitochondria. Ftmito binds directly to NADH dehydrogenase ubiquinone flavoprotein 2 (Ndufv2), a core component of complex I, stabilizing the holoenzyme. Loss of Ft leads to loss of complex I activity, increases in reactive oxygen species, and a switch to aerobic glycolysis. Defects in mitochondrial activity in ft mutants are independent of Hippo and PCP signaling and are reminiscent of the Warburg effect.

Proteolytic cleavage of the cell adhesion molecule Fat generates a fragment that is imported into mitochondria, and promotes oxidative phosphorylation by stabilizing the respiratory chain complex. This suggests that Fat has additional means of regulating tissue growth, besides its role in Hippo and planar cell polarity signaling.

Researchers led by Dr. Helen McNeill at the Lunenfeld-Tanenbaum Research Institute have revealed an exciting and unusual biochemical connection. Their discovery has implications for diseases linked to mitochondria, which are the primary sources of energy production within our cells.
Dr. McNeill’s team has an international reputation for their work in understanding how cells become organized into tissues and how growth is regulated during development. The group focuses on mutations in the fat (ft) gene. The protein product of this gene, called ‘Fat’, acts at the cell membrane to promote adhesion and communication between cells. Mutations in ft can cause cells to overgrow and become tumours. This occurs partially through the Hippo pathway, a pathway that is frequently activated in cancers such as liver, breast, ovarian and sarcomas.

Fat proteins are typically thought to work at the cell surface, but the team’s paper, published today in the prestigious journal Cell, uncovers for the first time that a piece of the Fat protein is actually processed and delivered into the mitochondria where it influences the energy status of the cell. Importantly, when this particular component is missing, the energy generating pipeline inside mitochondria become destabilized, leading to loss of energy production.

“We were amazed to find that Fat proteins interact directly with mitochondria in a cell, regulating the cell’s metabolism” says Dr. McNeill, a Senior Investigator at the Lunenfeld-Tanenbaum Research Institute and a Professor in the Department of Molecular Genetics at the University of Toronto. “We still want to know how a cell knows when to release the Fat protein into mitochondria, but for now, this new linkage opens up a whole new way of thinking about how cellular energy is controlled as well as new ideas about how to shut down cancer cell growth.”

When mitochondria stop working properly, cells no longer have an efficient energy source. Instead, cells will switch to glycolysis to produce the energy they require, known as the Warburg effect. Similarly, tumour cells have glycolytic rates up to 200 times higher compared to normal cells. Since the mitochondria is responsible for producing energy for essential cellular functions, problems with mitochondria can also lead to illnesses such as Type 2 diabetes, Parkinson's disease, heart disease, stroke, and Alzheimer's disease.

The research team has been evaluating their unique discovery in fruit flies, since they serve as a powerful model for human mitochondria. Their next steps are to test these findings on human cells.

“This new finding that links the cell membrane to mitochondrial function is important since it defines a totally new mechanism of cellular regulation,” says Yonit Tsatskis, a Research Associate in Dr. McNeill’s lab.

Her co-author Anson Sing adds, “When I started this project I had expected to learn a bit about eye development in fruit flies, but I had no idea that it would lead me to work on mitochondrial and metabolic defects in tumour cells. That’s what’s great about working in research, making new discoveries and connections. It’s exciting to be a part of that scientific process.” Sing is a Ph.D. candidate at the University of Toronto’s Faculty of Medicine and a researcher in Dr. McNeill’s lab.

Dr. McNeill and her research team are investigating the specific role the ft gene plays with the hope of identifying new treatment targets for cancer and other diseases related to Fat malfunction. 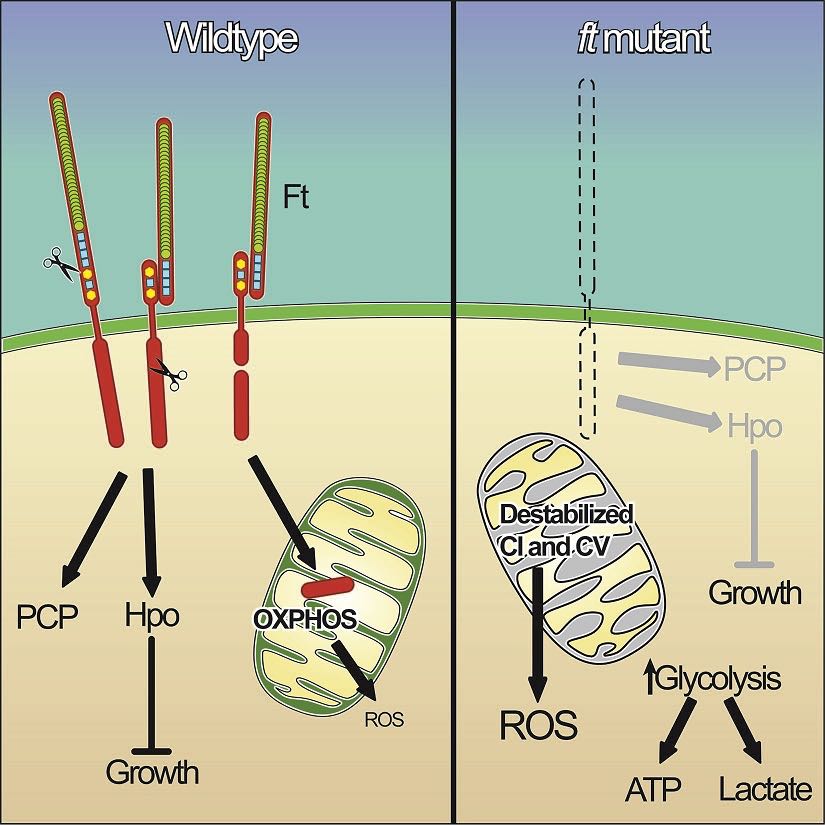 In normal cells, such as the image on the left, a piece of the Fat protein is processed and delivered into the mitochondria where it influences the energy status of the cell. In mutated cells, this particular component is missing, causing the energy generating pipeline inside mitochondria to become destabilized, and leading to loss of energy production.